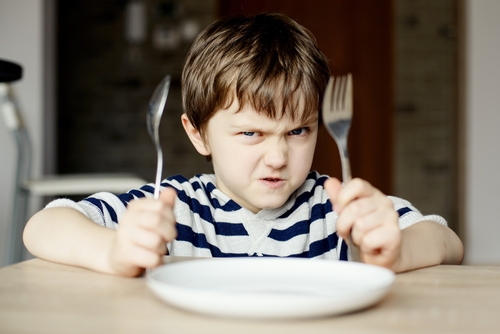 If you have found this blogpost in despair, I can reassure you that you’re not alone!  Most families have a fussy eater… and your child’s poor eating is not a reflection of you, (or your child) so cut yourself some slack.  If friends or relatives are thoughtless enough to pass comment; do your best to let it go. I understand that’s easier said than done when you feel like your parenting skills are being judged!

About My Fussy Eater

I’m not a professional on fussy eaters, but I do have experience of raising 3 boys. I’ve have one excellent eater, one average eater and one extremely fussy eater. I hope this experience qualifies me to comment!

My fussy eater was my stepson Oliver who I’ve had the priviledge of helping to raise since he was 3.  Oliver’s diet was already a challenge and extremely limited to say the least.

I tried introducing new foods and I tried to made meals look ‘fun’ but nothing seemed to work. The problem was that the more Oliver dug his heels in, the harder I dug in mine. I refused to give up – sadly making it a competition (which coincidentally I lost spectacularly!)

It was beyond frustrating.  I couldn’t understand why everyone else seemed happy just to give in. I didn’t want to label him as a ‘fussy eater’ – and let him eat whatever he fancied.  As a keen cook, the food I prepared was a way of showing how much I cared, and it felt like every loving meal I made was rejected.  I was confused and worse devastated that I was a failing as a Stepmum.

This may go without saying, but switch off the TV, and move any electronics – including yours out of the room whilst you are eating. Ensure there are no distractions. Mealtimes should be focused on food and connecting with your family. None of my recommendations will work if the child is more interested in whats on TV than the food in front of them. Nor will it work if you are browsing Facebook instead of paying them your full attention. It’s a small sacrifice to make to help sort out poor eating habits.

The fussy eater will always win – you cannot force feed a child. My best advice is to offer the food, and if they refuse it, calmly take it away.  Here’s the hard bit… under no circumstances do you let them see your frustration.

Avoiding showing negative emotion in front of Oliver was definitely the key to not making mealtimes anxious for him and eventually me.

Accept that the situation will not change overnight.  Praise small wins.  If Oliver tasted just a teaspoon of something new, we’d say “well done for trying it” and casually move on without too much fuss.

Controversial. It went against everything I had learned from my own parents (we were a finish your plate or no dessert household).  I figured if I offered a healthy dessert at least Oliver ate something nutritious at mealtimes.  A platter of different fruits that I placed in the centre of the table always worked as he’d usually wolf down strawberries and grapes – so at least I could relax knowing he had eaten something nutritious.

I won’t pretend I didn’t get negative comments from older relatives who ‘did it differently in their day’. I found a polite and confident “it’s been difficult to know what’s best; so we are doing what works for us” usually marks the end of the conversation without anyone getting offended or upset!

Oliver seemed to like having an empty plate in front of him, so he could continue to control what he ate . Perhaps it was less of a challenge for him to have a couple of mouthfuls of food on his plate at a time as opposed to a full meal. This made sharing platters our family mealtime saviour.

Oliver may not have eaten much variety (sometimes I think he just ate the bread!) yet he always ate something. The most important lesson was teaching him to enjoy sitting around the table and being involved in the ‘occasion’ of family meals.  It also meant his younger brothers didn’t notice what he did or didn’t eat, so we avoided them copying Oliver’s habits.

I’ve seen many children who are fussy about having different foods touching on the plate.  Gravy or sauce over a meal was also a big no-no for Oliver.  Accept it as a childhood quirk and serve dinner in ramekins dishes (I used to use an Indian Thalia plate).  At the end of the day, if they eat the food albeit in a slightly unconventional way does it really matter? See it as a win for you.

On a camping holiday my Mum successfully bribed Oliver £1 to try a red kidney bean calling it a ‘camping bean’.  On this occasion it worked, and over a decade on, kidney beans are still fondly known as ‘camping beans’ in our household!  Be warned though, this was an isolated success, and given children need to try something an average of 8 times before they like it,  you may need deep pockets if you take the bribery route!

Did My Techniques Work?

Small wins were the key to success but overall yes.  Gradually Oliver became open to trying a tiny taste (he almost always disliked it), but eventually in his mid-teens he started trying things successfully on his own. He suddenly would just take the food he had always avoided and without any fuss or need for praise. He is now 19 and eats virtually everything I put in front of him with the odd exception.

Who knew – kids really can grow out of it. Phew!